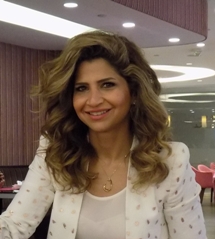 Nouf Al Mutawa graduated from Boston University in 1998, majoring in Mass Communications & Advertising with a concentration in French. Upon completion, she joined Gulf Bank in 1998 starting as a Marketing Assistant and worked her way up to Marketing & Corporate PR Assistant Manager.

With the stresses of working in a bank, she found baking to be a very therapeutic post-work hobby. Eventually her hobby developed into a passion, which led to the dream of owning her own business and opening a concept that did not exist in the Gulf region: a dessert concept specializing in several varieties of chocolate drinks & desserts. It was a perfect blend of passion and strategy.

In June 2003 she left the bank to pursue her dream. The Chocolate Bar became a reality and opened for business in August 2004.

In 2013, the Arab Woman Awards, in its first edition in Kuwait, gave Nouf the “Entrepreneur of the Year” award. She described it as “a great honor and validation to all the hard work & challenges that we have faced over the years.”

For 11 years, since she began as Partner & Managing Director to the company that owns The Chocolate Bar (Bon Group), she has faced new challenges and experiences every day. Today the group has 5 operating branches in Kuwait with a 6th due to open soon. Additionally, they are currently working on expanding into the Middle East and the rest of the world.

The Chocolate Bar was established by Bon Group in 2004. We are a Kuwaiti concept created for the love of chocolate, and are proud to be pioneers in the “made fresh from scratch” philosophy. To us it is the taste not the appearance that counts.

The Chocolate Bar’s goal is to provide our customers with a pure chocolate experience in a comfortable, relaxing yet lively atmosphere. The Chocolate Bar is a place to indulge. Indulge in the food, the setting, and the service. It is a place for friends and for family. For sharing and for choosing to eat it all on your own! It is our aim to create a place in which people leave happier, and more satisfied than when they came in.