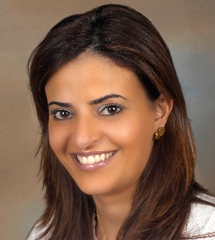 Ghosson Ghassan Al Khaled is one of a growing number of highly educated and successful professional women who are gaining prominence throughout the Middle East.

“Arab women today are not only inspiring future generations of aspiring females, but driving the advancement of national economies and political agendas across the region,” the Kuwaiti Times said in 2014, announcing that 17 Kuwaitis—including Al Khaled—were voted among the Most Powerful Women ranking published by Forbes Middle East.

Al Khaled joined the family business in 2002, after graduating with honors; a bachelor’s degree in civil engineering and construction management from Kuwait University, followed by a master’s degree in building science from the University of Southern California.

During the construction of ACICO’s 128-suite Palms Beach Hotel & Spa in 2005, Al Khaled oversaw each aspect of the project down to the selection of the heads of departments and management. She was named chief operating officer of ACICO Industries and has since, not only paved the way for many subsequent successes but also for ACICO’s expansion into new markets.

ACICO Industries is a Kuwaiti fast-growing company whose products meet the basic necessities and requirements of modern life of building materials. ACICO activities went beyond the Kuwaiti borders to the neighboring GCC markets. Through its plants in Kuwait, UAE, KSA and Qatar, ACICO makes building units from reinforced and unreinforced aerated concrete with its special specifications such as light weight, thermal insulation, fire resistance, and environmental safety. The company utilizes the basic and most advanced materials like ground sand, cement and limestone to make its products. The company is not content with this achievement but looks forward to extending to other MENA countries in accordance with an expansionist policy carefully planned and studied to augment its revenues and future profits.

Another basic ACICO product is the cement of both types: the normal Portland and the resisting type. The Ministry of Public works (MPW), the House Care Institution, and other government agencies approved ACICO Cement plant, products and ACICO cement products. In addition, ACICO Industries joined the ready mix market through its own plant to meet the increasing demand in Kuwait for this product.

ACICO has the qualified manpower including the consultants, engineers and skilled technicians under a senior executive management which enjoys extensive knowledge and expertise in the building materials industry and constructions, All the company plants both inside and outside Kuwait are equipped with the state-of-art machinery and equipment needed to conduct tests in accordance with the local and global standards and specifications.

ACICO Industries managed to be involved in the contracting world steadily through ACICO Construction which is approved by the Central Tenders Committee (CTC) as a grade “A” inside the State of Kuwait. The company managed to break the traditional models in the construction world as is obviously evident in its local and regional projects in addition to its special construction system which is now widely known as: “ACICO Building System”.

ACICO Industries reinforced its activity in the housing development sector through cooperation with Al Masaken Real Estate Development Company, its real estate development arm. It builds housing units in accordance with the advanced world specifications. This dealing might secure the absolute integration for the company reputation and produce a solid and tangible expertise among rival real estate companies.

In achieving to its strategic plan, one of the affiliated companies of ACICO Industries involved into the Precast by acquisitioning one of the most important plant specialized in this area, where it was called “ACICO Industries for Precast and Constructions” which comprises of many vital and industrial sectors like precast industry, ready mix concrete, and general contracting sector. In addition to Steel Cut and Ben sector.

This assisted ACICO Industries to enter the real estate market strongly through the following real estate and hoteling projects:

Radisson Royal Dubai Hotel located in Sheikh Zayed Street, it comprises of 60 floors and 471 rooms and suites which is exemplary in terms of its fantastic design and innovative execution.

Nasima Hotel Apartments Tower is also designed to be the destination for excellence seekers, both at residential and commercial levels, through its distinguished location at Sheikh Zayed Street in addition to its services which convert staying therein immortal joyful memories.

Radisson Blue Resort Al Fujairah extends for more than half a kilometer along the beach where you can enjoy the epitome of natural beauty associated with comfort and relaxation. This resort contains of 257 rooms and resorts in addition to abundant and distinctive services and features which render its stay unforgettable.

Last but not least is ACICO Business Park.

ACICO Industries, with its huge market value, the growing investment volume in the industrial and real estate markets, its projects across the region, and its innovations in the volume and quality of projects on the real estate front are nothing but extension and expression of a group of experienced constituents in their fields of expertise who combined their and unified their visions in ACICO Pot to convert it into a pioneer in the developed building materials industry, construction and real estate development.