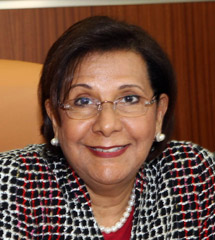 Professor Moudi A. Al-Humoud was named rector of the Arab Open University in January of 2013 after a long career at the most senior level of government and academia. Starting as an assistant professor in the business administration department of the College of Commerce, Economics,and Political Sciences at Kuwait University, Professor Al-Humoud rose to become dean of the college before becoming Kuwait University’s vicepresident for planning.

Creation of the Arab Open University(AOU) was announced by HRH Prince Talal Bin Abdulaziz, president of the Arab Gulf Development Program, in 1996. The goal was to establish a “non-conventional academic institution” with the mission to “develop and disseminate knowledge, and build expertise according to international quality standards without time or geographical barriers for the sake of contributing and preparing manpower for development needs, and to build a science and knowledge society in the Arab countries.” The prince’s vision also included establishing a foundation “which contributes to steering development in scientific, social and cultural spheres.”

Today the AOU has more than 28,460 students spread throughout eight countries. Some 20,690 students have graduated, more than half of them women.

The AOU is headquartered in Kuwait and enjoys a strategic partnership with Britain’s Open University. It has campuses in Kuwait, Jordan, Lebanon, Bahrain, Saudi Arabia, Egypt, Oman and Sudan.