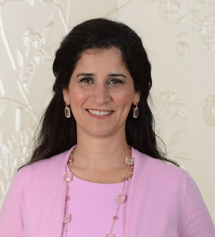 Today,Sheikha Intisar Salem al-Ali al-Sabahis an author, entrepreneur, and philanthropist. Shehasspent her adult lifecommitted to making a difference: first within her family of four daughters, then in her community.

While focusing on being a hands-on mother to four daughters, Sheikha Intisar also served on the board of directors andmanaged listed companies while dabblingin some community work.But it was after her youngest daughter started primary school thatsheturned her full attention toward the community.

In 2011, Sheikha Intisar established Lulua Publishing with the mission of helping transform readers’ lives and contribute to their personal growth. Today it is the only publishing house in the region fully dedicated to the personal development genre. Key publications include Good Health Arabia and Vacations & Travel Arabia magazines.

Sheikha Intisar is also a founding member of K’s Path, Kuwait’s (and the Gulf’s) largest nongovernmental animal welfare organization. She serves on the executive committees of the Kuwait Association for the Care of Children in Hospitals and Bayt Abdullah Children’s Hospice, two private associations committed to providing quality medical and psychological care to children with life-limiting or -threatening illness.

In 2013, Sheikha Intisar founded Alnowair, the first ever nonprofit initiative dedicated to spreading a positive attitude in Kuwait.The initiative inspires positivity among the people of Kuwait through attractive campaigns. In just its thirdyear now, Alnowair is already implementing youth programs that create positive learning environments in schools and universities.

Also in 2013, she cofounded Prismologie, a brand of body-care products created to stir the senses, inspire the mood, and enhance daily life. Based on the idea thateach color has a specific effect on one’s mood and well-being, the company took key elements from each shade to bring out the very best of them. Each product is a bespoke blend of gemstone crystals, subtle scents, and scientifically researched actives. Prismologie launched in May 2015 to great acclaim across all Space NK outlets in Great Britain.

In that same year, she founded Lulua Production House, which launched in 2015 its first feature film Habib Al Ard in conjunction with Kuwait’s commemoration of the twenty-fifth anniversary of the Iraqi invasion. The movie was written and directed by Ramadan Khasro and recounts the life and death of Kuwaiti poet Fayeq Abd El Jalil who was executed by the Iraqi occupying forces.The film was shot entirely in Kuwait using the latest cinematic techniques.

Moreover, herpassion toward making a difference in her country can be best summed up by her avant-garde weekly column in Al-Qabasnewspaper, which uses her life experiences as inspiration for others to strive for a positive outlook toward life.

Lulua Publishing House was founded in 2011 to publish books and magazines that help transform readers’ lives and contribute to personal growth and empowerment.

The topics that are explored by Lulua Publishing reflect the vision of the publisher and cover themes such as self-development, inspiration, empowerment, motivation, and mental and physical wellbeing.