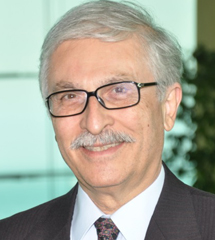 Kazem Behbehani is a leading researcher in immunology and tropical diseases who has worked with the World Health Organization (WHO), the International Atomic Energy Agency (IAEA), and various governments and international nongovernmental organizations (NGOs).

Dr. Behbehani studied medicine at the Universities of Kuwait, Liverpool and finally London, where he received a PhD in immunology. He was then a postdoctoral fellow at the School of Hygiene and Tropical Medicine and the Mathilda and Terence Kennedy Institute of Rheumatology, both in London.

Returning to Kuwait, Dr. Behbehani taught at the University of Kuwait Medical School, where he held various deanships, and accepted an invitation to be a visiting professor at Harvard Medical School. He was also deputy director general of the Kuwait Institute for Scientific Research and served on the board of IBM’s Scientific Center in that country.

Dr. Behbehani held various positions with the WHO, including vaccine researcher in the global AIDS program; program manager for tropical disease research; and director of the Control of Tropical Diseases Division and the Geneva-based Eastern Mediterranean Liaison Office. His then served as assistant directorgeneral for external relations and governing bodies and in 2006 was short-listed as an official candidate to be director general.

Back in Kuwait, Dr. Behbehani was named director general of the Dasman Diabetes Institute. He has served on several international advisory boards and chaired the IAEA’s External Panel for the Evaluation of Human Health Program including the Harris Manchester College Board of Regents of the University of Oxford. He is also interested in e-health (the application of information technology to health) and environmental issues.