Today, Sheikha Intisar Salem al-Ali al-Sabah is an author, entrepreneur, and philanthropist. She has spent her adult life committed to making a difference: first within her family of four daughters, then in her community.

While focusing on being a hands-on mother to four daughters, Sheikha Intisar also served on the board of Directors and managed listed companies while dabbling in some community work. But it was after her youngest daughter started primary school that she turned her full attention toward the community.

In 2011, Sheikha Intisar established Lulua Publishing with the mission of helping transform readers’ lives and contribute to their personal growth. Today it is the only publishing house in the region fully dedicated to the personal development genre. Key publications include Good Health Arabia and Vacations & Travel Arabia magazines.

Sheikha Intisar is also a founding member of K’s Path, Kuwait’s (and the Gulf’s) largest nongovernmental animal welfare organization. She serves on the executive committees of the Kuwait Association for the Care of Children in Hospitals and Bayt Abdullah Children’s Hospice, two private associations committed to providing quality medical and psychological care to children with life-limiting or -threatening illness.

In 2013, Sheikha Intisar founded Alnowair, the first ever nonprofit initiative dedicated to spreading a positive attitude in Kuwait. The initiative inspires positivity among the people of Kuwait through attractive campaigns. In just its third year now, Alnowair is already implementing youth programs that create positive learning environments in schools and universities.

Also in 2013, she co founded Prismologie, a brand of body-care products created to stir the senses, inspire the mood, and enhance daily life. Based on the idea that each color has a specific effect on one’s mood and well-being, the company took key elements from each shade to bring out the very best of them. Each product is a bespoke blend of gemstone crystals, subtle scents, and scientifically researched actives. Prismologie launched in May 2015 to great acclaim across all Space NK outlets in Great Britain.

In that same year, she founded Lulua Production House, which launched in 2015 its first feature film Habib Al Ardin conjunction with Kuwait’s commemoration of the twenty-fifth anniversary of the Iraqi invasion. The movie was written and directed by Ramadan Khasro and recounts the life and death of Kuwaiti poet Fayeq Abd El Jalil who was executed by the Iraqi occupying forces. The film was shot entirely in Kuwait using the latest cinematic techniques.

Moreover, her passion toward making a difference in her country can be best summed up by her avant-garde weekly column in Al-Qabas newspaper, which uses her life experiences as inspiration for others to strive for a positive outlook toward life. 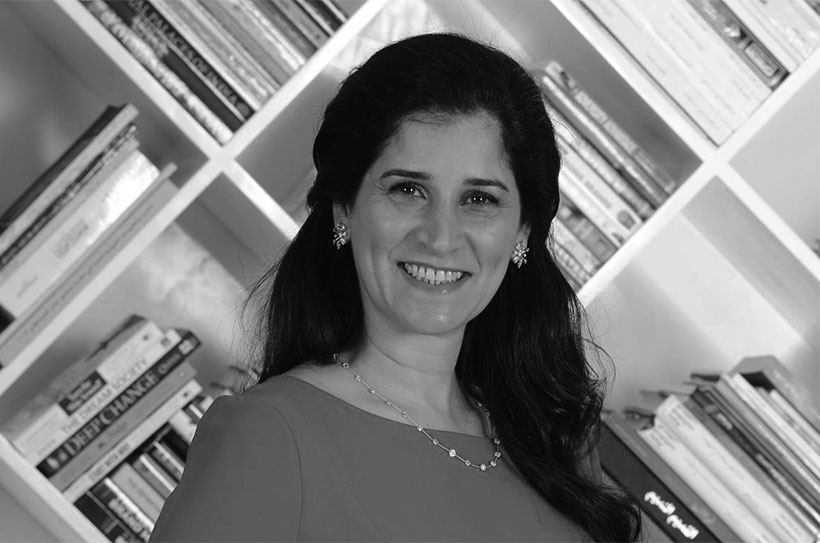 With falling oil prices, in your opinion what needs to be done to boost the Kuwaiti economy?

Throughout its history, Kuwait was always able to find alternative sources of income when needed, from shipbuilding to trading to pearl diving to oil. All of these industries developed because of Kuwait’s resourceful people; to continue the progress of Kuwaiti’s business-savvy spirit is the best long-term investment.

Kuwait has recognized the importance of youth development and education, placing them at the top of the government’s agenda. What are some of the initiatives in place that give evidence to development? How crucial is youth development for the overall growth of Kuwait?

In the past few years, many initiatives have been started, the two biggest being an entire ministry dedicated to the youth and the SME [small and medium enterprises] fund. Kuwait is made up of 70 percent youth and they are instrumental in its future.

Kuwait is known for being a welfare state, where a lot is provided for to her citizens. What role does this play in the development of entrepreneurship among the Kuwaiti youth? What types of projects are being implemented to nurture and develop entrepreneurs?

Welfare has provided Kuwaiti citizens with the safety platform that allows them to develop their competencies and maintain their entrepreneurial spirit. Not having to work at a very young age has allowed them the time to develop their networks and the personality needed later on in life. This socializing spirit is what allows them to have the best platform for starting their business with the aid of the startup labs and incubators both government and privately owned. There have been many local startups that have become Gulf franchises.

With the interest of positioning Kuwait as a knowledge-based society, what is the position that Kuwait has in terms of education, innovation, and creativity?

Because of the diversity in Kuwait and the nurturing environment, Kuwaiti youth rank highest in the Gulf in openness to try new avenues either in education through very distinct specialization; studying abroad, with the highest diversification as a percentage of pupils in their topics of study; or by being on the top in all IT and social media channels.

You founded Alnowair in 2013, the first-ever nonprofit initiative dedicated to spreading a positive attitude in Kuwait. What inspired you to embark on this venture? What did you gain from this experience?

In early 2013, I came across a video that shook my core. A young man posted on YouTube a song that bashed Kuwait, and showed images of a country I hardly recognized as my own. As the images of trash and traffic flashed on my screen, tears welled up in my eyes. I thought, “Why is he doing this to Kuwait? Kuwait doesn’t deserve this.” I contacted the young man and asked him why he would do such a thing. He said that it was the truth and he thought that by bashing it, he could make it better.

We spend days discussing these kind of videos with our friends and families, dancing around the topic and analyzing it in every which way. We fill our minds with the negativity around us so much that we hardly have the time to concentrate on the solution. Alnowair as an idea came to me when I was reading an article on CNN’s website by Shawn Achor, a pioneer in the field of positive psychology. The article spoke about how, as human beings, we dictate our mindsets, either positive or negative. He said that it is a scientific fact that when our mindset is positive we see mistakes as being rectifiable, but if our mindset is negative then the brain literally is out of resources to see any good and all our subsequent thoughts are negative. As I read the article I thought to myself, “This is it. This can fix our problems.” Living a fulfilled life is nothing but a choice, a choice to have a positive mindset at any time. And with a positive mind come solutions, answers, and progress. It opened my mind, and this is when the idea of Alnowair came up, to make people aware of this simple choice to be positive.

We started off with just four advertising professionals and have grown to more than thirteen employees now. We have executed more than twenty campaigns so far, and have won awards from the United Nations and Arab Media Forum, along with some amazing feedback from our audiences. Even more, with each campaign, I feel like I have grown as an individual too. Each of our campaigns tackles a trait that positive people have, and I have been lucky enough to be exposed to these campaigns, in such close proximity. Every campaign allows me to experience firsthand what positivity is and how can we develop a positive attitude. And I believe that is the one thing I cherish most from what I have gained from Alnowair.

Our plan is to tackle different areas of the demography here in Kuwait, and for which we have initiated different divisions at Alnowair to implement specially designed projects catering to each of these demographics. One of them is the Youth Development Program, which focuses on inculcating positive thinking and attitudes in schools and universities, at the grassroots level of our society. On the other hand, we have many other projects under way, some of which you will see shortly. It is a very exciting period at Alnowair and we have just begun.

Finally, if you could summarize your vision for Kuwait and its international identity for the future decades, how would you like your country to be recognized?