Lord Jonathan Marland is a successful British businessman with ties to Kuwait and extensive experience in promoting British trade and investment abroad. He has held various senior government posts, mainly in the areas of energy and business promotion.

Marland built his business career in the city of London and helped found what is now the Jardine Lloyd Thompson Group plc insurance multinational, a world leader in its sector. He serves on the boards of several companies and is involved in numerous public and charitable bodies. He was awarded a peerage as Baron Marland of Odstock in 2006.

Known as an entrepreneur, he has led the acquisitions of numerous companies.

From 2010 through 2013, Marland held various senior government posts under Prime Minister David Cameron including the prime minister’s trade envoy, minister at the Department of Energy and Climate Change and the Department for Business Innovation and Skills, and chairman of British Business Ambassadors.

In 2013, Marland and Mohammed Alshaya, the executive chairman of Kuwait’s Alshaya retail and entertainment conglomerate, were named co-chairs of the newly created Kuwait British Business Council. This semiofficial body was created to boost trade and investment relations between the two countries, and to identify and remove any obstacles hindering bilateral trade and investment. Marland’s other links with Kuwait include serving as a member of the high advisory council of the Kuwait National Fund for Small and Medium Enterprise Development—a body with US$7 billion in Kuwaiti government capital.

Marland serves as chairman of the Commonwealth Enterprise and Investment Council and president of the Commonwealth Youth Orchestra. Charitable activities include chairing the Churchill Centre UK; serving as a trustee of the Atlantic Partnership and the Guggenheim UK Charitable Trust; and chairing Tickets for Troops, an organization that encourages sporting and cultural organizations to provide free tickets for servicemen and women and veterans. He is a major shareholder in the Cricketer magazine. 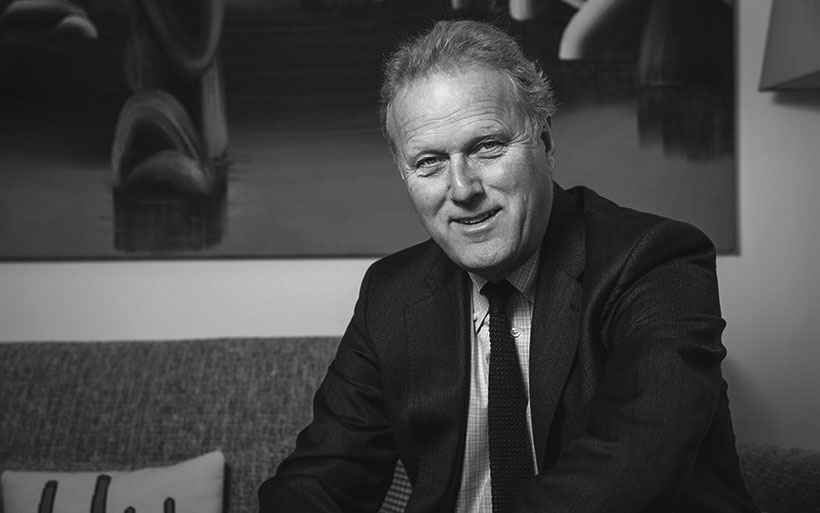 Fostering stronger ties between the UK and Kuwait

Could you please explain to us how Kuwait came into the picture?

We have had long-term relationships as a nation with Kuwait; however, we did not really know the new ministers of the government at that time. I was lucky to be able to meet many of them, in particular the younger generation of ministers—Sheikh Mohammad Abdullah Al-Mubarak Al-Sabah and H.E. Anas Al-Saleh, among others. Because we had such a coveted ambassador in Kuwait and our diplomatic relations were excellent, we were able to start building strong relationships relatively easily. Kuwait and Britain have a good royal connection matched with great ministerial links enabling businesses to foster underneath it. Kuwait had a sovereign wealth fund based in the United Kingdom for sixty years. Kuwait has been one of the biggest investors in the United Kingdom for years and would be continuing to invest, and so the platform was there for mutual development. A series of events then took place when we took businesspeople to Kuwait and business delegates came over to the United Kingdom with the country’s ministers to show what opportunities Kuwait offered. The visit of the Emir, which was considered hugely successful, reminded us that we were long-term friends. I think it is fair to say that prior to this point, the relationship between Kuwait and Britain had withered; we had taken it for granted.

Since 2010, Kuwait developed a plan with the objective of increasing the participation of the private sector and also attracting foreign investment. What do you think are the possibilities for UK companies to participate in the development of Kuwait?

There are tremendous opportunities in the oil sector and British companies have been awarded some of the new oil-sector contracts. The rejuvenation of the airline has seen Airbus planes with Rolls Royce engines, which have been ordered and will be arriving very soon. In regards to the new airport, the architect selected was Norman Foster. There will be a lot more activity surrounding the airport and British companies will have the opportunity to get involved. British companies will not do the contract of the airport; we will do a lot of the technical aspects—for example, security. The great thing about Kuwaitis is that they are extremely friendly people. They take a long-term position and drive a very hard bargain. Once you have taken the time and set up the relationships (and business is all about relationships) you can establish very strong, open, and trusted ties in Kuwait. I was recently honored to be invited to join the board of the new SME [small and medium enterprises] fund that has been set up by the government to help develop small and medium-sized enterprises in Kuwait. The challenge is to identify areas of opportunity where there is a place in the market for Kuwait to export and develop: that could be in logistics, the tech space, or the medical sector. It is important to research where there is a gap in the market and where Kuwait could become the regional hub for such activities.

There have been talks about diversifying the economy since 1999. The fact is the Kuwaitis have moved at a very slow pace so far. However, there have been some recent developments that may be encouraging. In your opinion, should Kuwait go head to head with places like Dubai? Or should they look for niches? And if they´re going to look for niches, what do you think those niches are?

You say go head to head with places like Dubai—The Avenues is the third biggest shopping mall in the world, which is a phenomenal achievement. You look at the brands of the Alshaya Group that they have the licenses for, and indeed own throughout the region, and there is still possibility for further development in retail. Kuwait has a niche for the medical sector, as it has the best diabetes hospital in the region. However, there is space for further development in medicine—such as specialized leukemia research or a training school for the nurses for the region. I think it is really a factor of understanding what skills exist within the country, creating centers of excellence and use of those skills. Cost of labor in Kuwait is very expensive. You would not be able to compete with cost of labor in India; however, you have a skilled and educated workforce. One must identify what skill sets are available within the country and set up the incubator to build those skills, so that they become businesses that can progress and build upon themselves. Kuwait boasts technology, medical excellence, and logistics opportunities for expansion (once the new airport is built and new airlines come in). In reference to Iraq, just the geographical location of Kuwait will bring enormous opportunities for Kuwait to go and help with redevelopment when peace returns.

At what phase do you think the UK could have a particular advantage over other countries bargaining with Kuwaiti firms?

We have skills, and we have the need to grow our economy through export; Kuwait has complimentary skills and the capital. I think that combination of investment, skill sharing, and trust means that Kuwait is an ideal partner for us. If you look at our medical profession, we have thousands of Kuwaitis coming into London to be medically treated and we are privileged to have that, but why should not we transfer some of our skills to Kuwait; enterprise then develops as a result of that. You look at our education system, which has been partially integrated in Kuwait. A lot of Kuwaitis come to the UK to be educated, or further educated. Why don’t we create that opportunity in Kuwait, so they do not need to travel and have the system installed within their country?

Kuwait has been hampered in the past by its growth into democracy, where parliament has a voice, rightly so, but at times, as with every parliament, has been irresponsible and has perhaps prevented the progress that that was opportune. Because Kuwait moves slowly and steadily, currently it is starting to adapt very nicely, in that parliament has realized the need for growth, the need for diversification, and the need to allow ministers to progress rather than hamper change. I think that should set the course fair for this development plan that we are talking about.

How long have you been dealing with Kuwait and how would you describe this experience so far?

Not for very long, three or four years, but intensely. I visit three or four times a year and am very lucky to have ministers and businesspeople visiting me here in London. I was honored to meet the finance minister last week and the chief executive of KIA [Kuwait Investment Authority]. The international relationships are building and stabilizing. I think the creation of the Kuwait/British Business Council with my co-chairman Mohammed Alshaya is a very important step for us. We are setting up an autonomous entity that is going to be greatly focused on bringing British businesses to Kuwait and helping to establish them there. This is good for both Kuwait and the UK.

How effective thus far is the new investment law that you formulated? When are we going to see progress?

We are already starting to see progress. UK businesses are starting to grow and our balance of trade in Kuwait is close to doubling—that´s a huge amount. We were charged with doubling the trade to Kuwait and we are getting pretty close to that target. The point is to establish an entity, which helps promote and develop trade. We now have people on the ground who can advise British businesses on who to partner with, what the opportunities are, and facilitate those opportunities. I had the business plan yesterday coincidentally and I have seen, for example, the architect’s drawings of the facilities we are going to offer, where businesses may have a desk and find out what the best approaches to access the market are. British businesses will have a base when they come over; they will have full-time staff who have already established relationships—for example, with Martin Hall, the main director. If the spirits are willing on both sides, things happen. Now, there is a sense of energy, there is a sense of desire, and that is a good combination to get things done.

How do you promote this in the UK?

First, you need supporters of Kuwait, and that is why within the Kuwait/British Business Council, you have a board made up of half Kuwaiti nationals, and half British businesspeople. My desire is to have six Kuwaiti nationals and six British nationals, all of whom are in businesses and that have a voice in the UK and Kuwait. I think it is a factor of getting out and promoting Kuwait as the land of opportunity. I have taken businesses out to Kuwait and they have done deals.

If you had to send out a message about Kuwait, about doing business in Kuwait, about your experiences, what would that be in terms of encouraging UK and international counterparts?

I think we live in a very competitive global world with opportunities in Dubai, Abu Dhabi, Qatar, development opportunities in Africa, the Far East. My message to any country is: We are living in a globally competitive world. If you want to attract people to invest in your country or do things in your country you have to look at what the competition is doing. Recognize that the people coming to you need certain things in order to encourage them to be there, whether it is way of life, speed of setting up business, the tax regime, or the access to skills. Kuwaitis should take a look at what the competition is doing and question how they can make their country a better place to attract these companies to come in and be part of the development. I think if Kuwait would do that, and they are doing that, we will shortly see things happening.

Thank you very much, Lord Marland.